The owner of the hotel (François Faussurier) told us that the first 90 minutes of this trail was nothing but road walking. He also suggested that we do not stop for the day at Refuge Elisabetta and walk all of the way to Courmayeur. Our group decided to listen to him and we got in his van with the others in our hotel and he drove us up the road to Ville Des Glaciers. The 20 minute drive saved us 90 minutes of walking and it put us at the head of non-road trail.

We got out of the van and started making our way to the French and Italian border. It had been 2 days since I had a good hike so I felt ok going up the the trail. This was our first border crossing, and it was a lot less momentous than I anticipated. There were a couple of questions like, “Wait. Are we in Italy now?” and “Is that round plate the border marker?”
However we made it into Italy and we descended into a cow pasture on our way to our lunch stop. We had bought packed lunches from the hotel, so we made quick work out of the bread, hard boiled eggs, and tomatoes. The snickers bar was a bit of a disappointment, because well we wanted French chocolate!

It was a day with a lot of rolling hills, and nothing was too strenuous. We passed families that had donkeys and horses who were walking from Italy to France. With 2.5 hours remaining and nothing but descent in front of us my knees started to scream with pain. I could see Courmayeur below us and it seemed impossibly far away.
This next sentence is embarrassingly true. I was in so much pain I threw myself on the ground and rolled down a hill at one point. You can imagine that the plan did not have my usual attention to risk and reward. I went down very little and stood up wildly nauseous.

We kept walking and saw a guy hanging out by his truck at Rifugio Le Randonneur. Samer explained to him that I was having trouble walking and he agreed to drive Spencer and I to our hotel for $15 euros. We celebrated and Samer ditched his bag with us. Holly committed to walking all the way there with her backpack still on and we split up.

My savior, the odd Italian mountain man and I chatted without either of us knowing the others language. He has Canadian citizenship and told us to stay in his refuge next time. We thanked him and gave him a $20 and ended up in the very nice (but dated) Romantik Hotel Villa Novecento.

Don’t sleep at Refuge Elisabetta Soldini Montanaro. It makes for a really long day, but it gave us a break day in Courmayeur. 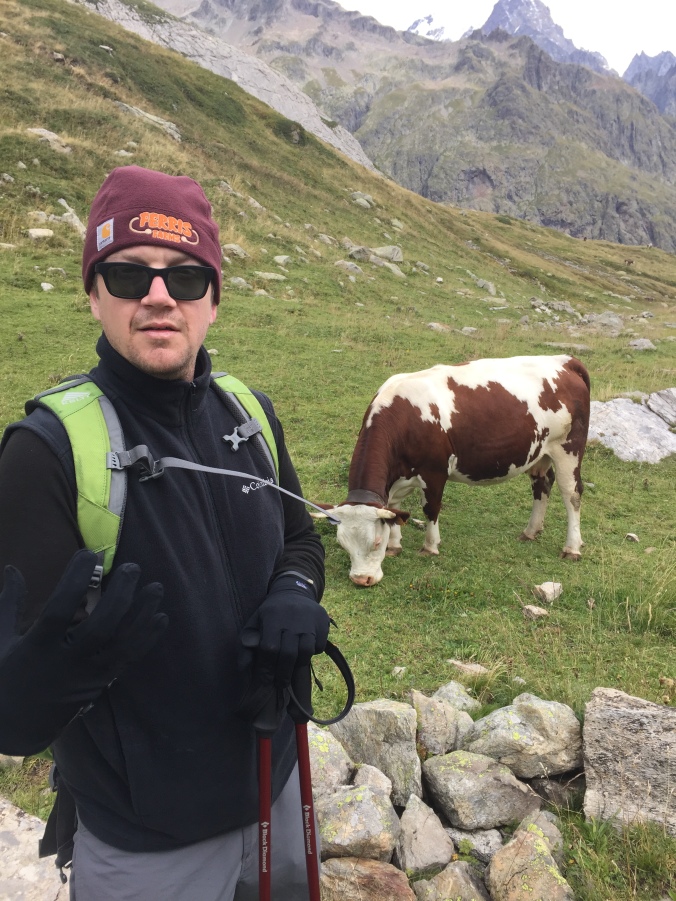 Next: Break Day in Courmayeur