We woke up in Sorrento to enjoy the view and start packing our bags. Then terror struck. When we arrived home the night before, I put my camera bag down on the ground while I opened the gate. Can you guess what I did not do? Answer: I did not pick my camera bag up. I rushed to the entrance, but my camera bag was not there. I tore through the house looking for it, but it was nowhere to be found. I was sure that I forgot it outside. Genarro was at the house gardening, so I told him what I thought happened. The old coot, asked me if I had been drinking the night before. (Answer: No)

There’s one road that leads to the beach, so I thought I would jog down to see if anyone had picked it up. No luck. Of the few places that were open, none had seen my bag. As I started to jog back up the hill I remembered the keys to our rental car were in that bag.

The oncoming logistics nightmare came into realization and all I could do was run faster up the old cobblestone roman road. When I got back to Casa Peach, Genarro greeted me with wonderful news. The neighbor found my camera! He returned home around midnight and spotted my bag outside the gate. They grabbed it for safe keeping and returned while I was out looking. Crisis averted.

While we were leaving, we met the tenants who moved into the second house (Puolo Relax House). They were an Italian couple with their daughter vacationing for a week. The little girl spoke perfect English that she learned it all from Youtube! The parents are  attorneys in Naples, but the husband is a DJ on the side. This is a video he produced. His wife is the lead actress in the video.

We said good-bye to the new family and Genarro. I drove us out of Sorrento until we got to a highway and from there Cathy took over on the highway. We dropped our rental car off at the Rome airport and took a taxi into Rome. When we got to Rome, Cathy went to talk to a guide about the remainder of her trip, and Glenda and I got a hop-on hop-off bus. We only had a few good hours in Rome, so this seemed like the smartest way to give Glenda a taste of Rome. 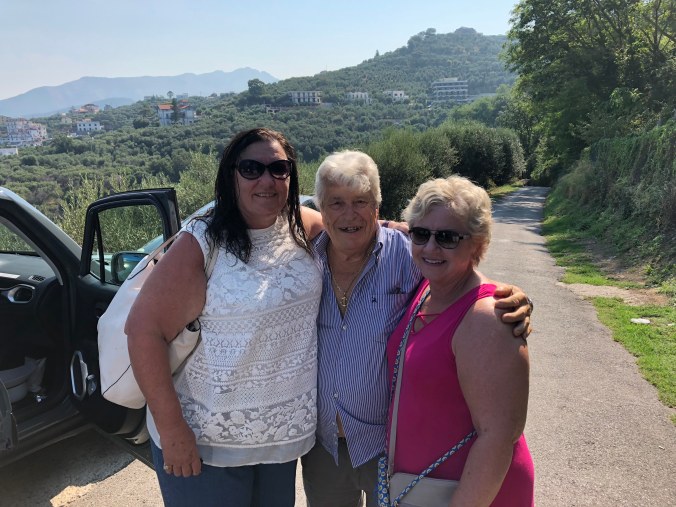 We hit many of the major places. The Colosseum, St. Peter’s square, Trevi fountain, the Imperial Forum, and finally the Spanish Steps. Glenda loved the Trevi fountain. This is also the spot we got gelato our first taste of gelato in Rome. I had hazelnut and it was delicious. We arrived at the top of the steps and met Cathy at the Barcaccia fountain at the base.

Glenda is checking out ancient Rome.

As soon as we arrived it started to rain pretty hard, which cut into the plan to wander the streets looking for that perfect final meal. We popped into Ristorante Piazza Italian Bistrot Roma that was near the steps. There was nothing fabulous about it, but I ordered the cacio e pepe and it was wonderful. My mom had the carbonara rigotoni and Cathy has a lasagna. We had a smoked salmon and arugula salad that was really good.
It was a long day and we quickly fell asleep in Bettoja Hotel Mediterraneo.

Conclusion: Thelma and Louise made it.