Wadi Rum is incredible.  You should go as soon as possible.

Ok, I’ll tell you more, but I really enjoyed Wadi Rum.  We all said goodbye to the Kempinski in the morning and Holly F. drove us to Wadi Rum.  She navigated through Jordanian checkpoints and enormous windmill blades being hauled along the road all in an underpowered 12 passenger van.  We made it to Wadi Rum in about an hour and checked in at the visitor’s center.

What is Wadi Rum?  It’s kind of hard to describe.  It’s a giant desert valley cut out of sandstone mountains.   It’s hot, brutal, and unlike anything you’ve ever seen before.  There are camps of different Bedouin families scattered through Wadi Rum and many of them are for tourists.

I made a reservation at the Bedouin Lifestyle Camp with Attallah Alblwi before we arrived. Originally, we booked a camel tour of Wadi Rum with the option to camp under the stars.   When we got there, he offered (upsold) to change our reservation to that of a jeep tour, with an option to ride the camels for an hour at sunset.   We decided that this change was a good idea because we would be able to see more things in Wadi Rum that day.

Our driver in Wadi Rum was named Salman.  He loaded all of us into his jeep and  told us that we could ride on the roof rack.  One person in our group questioned if we needed a helmet and then I chuckled because there were obviously no helmets available.  Our jeep hit the roadless desert and the small Bedouin village quickly faded away. 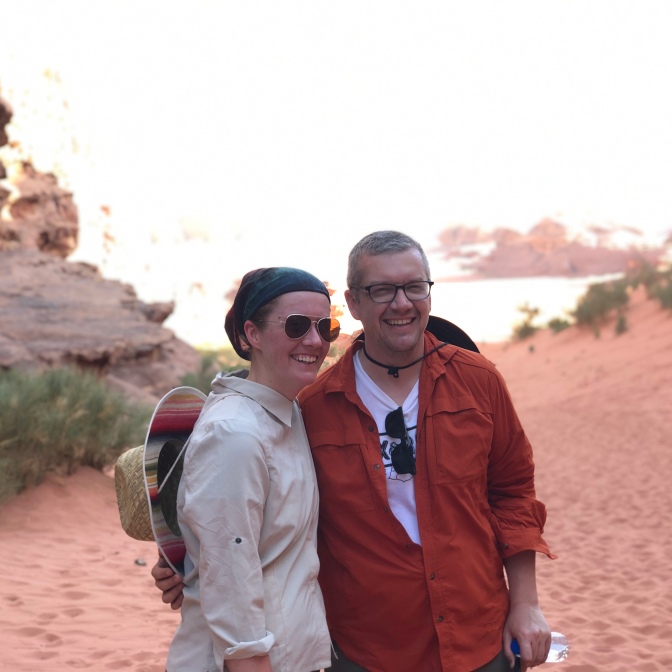 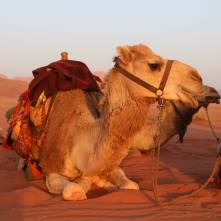 We explored Wadi Rum for the day, which included visiting a canyon, climbing rocks, and sandboarding.   We epically failed at the last one.   The board would simply not move and by the time we were halfway down the dune, we were utterly exhausted from making it move.   Here is a real-time video of me attempting this sport.


Salman made us a lunch of kafta and a tomato stew in the shadow of the mountain.   We napped while he prepared it and when lunch was over we headed out to the desert again.   Salman was a very fun guy and we stopped for a dance party at one point.  At 6:30 we met up with a few camels and took a ride during sunset.


That night we returned to the Bedouin camp for dinner and music.   There were several dishes but the highlight was a dish called zarb.   Zarb is basically a Bedouin barbecue.  They cook the food in a pit in the ground.   The chicken was very good, but the potatoes were fantastic.    The grill is a mettle ring with multiple grated tiers.    Coals surround all sides of it and it is covered with sand and a blanket.

Finally, the night ended with tea and music.   While we were listening, Samer decided to ask if he could play the drum with them.   The drummer happily obliged and Samer became a member of the band.   Here is a clip of him playing.

Our group of 7 decided to leave camp and sleep under the stars.   It was an incredible experience.   Salman drove us for 15 or 20 minutes away from all the lights.   We all slept together on cushions and a large mat on top of a sand dune.   When there are no lights on the ground the night sky lights up.  The cosmos are infinitely impressive.    We watched shooting stars for a long time and I was one of the first to doze off.  It was magical.

Next – Jordan – Day 4: Drive to Petra (and a visit to Little Petra)