I was really excited to visit Tripoli.   Like Tyre and Saida, I never visited this city before.  It has a reputation for being a very old city because the wars that ravaged Beirut left Tripoli mostly unscathed. I’ve always thought Tripoli had an ancient literary vibe to it, but maybe that is because I obsessed over the burning of al-Saeh Library a few years ago.

On our way to Tripoli, we stopped at the Our Lady of Noorieh Monastery.  It’s a Greek orthodox monastery with a beautiful view of the Mediterranean.  No one needs to stop for long, but it is quite lovely and has a nice olive farm on it.

Our guides for the day, were our friend George’s parents, Rosa and Antoine.   They took us to a restaurant called  Tic Tac Abou Rami.  It was delicious.  They served us chickpeas about 5 different ways.  While we waited for a seat, the neighboring bakery gave us a piece of pita straight from the oven.   It was so good. We ate fatteh, hummus, ful medames, chickpeas in a tahini sauce (not blended), and lots of vegetables.

After brunch, we made our way to the famous souks of Tripoli.   While we were exploring, Antoine wanted to take us to the famous Soap Khan.  This is a courtyard in the middle of the souk that was made for the soap makers.   We all walked into a shop that sold blue jeans and through a backdoor into the courtyard.  We went to a soap workshop that started in the 15th century.   The place is called Hajjar and they make really high-quality soap.   We ended up buying quite a few souvenirs from the store and Holly B. got a free massage!

We continued to explore the souk and found our way into a sweet shop.  We tried a few things, but the one to stand out to me was something called jazarieh. It was a candied squash dish with nuts. It was very interesting. From there, we visited the crusader castle called Citadel of Raymond de Saint-Gilles.

This castle was built in 1100.  It’s a massive structure on top of a hill, that provides a nice view of Tripoli.   We did not have a guide while we were in it, so I only know what the guide book says.   There is not much of the original structure left, but the Lebanese military still uses it (though I do not know what for.)

We ended our tour of Tripoli with dessert at the famous sweet shop called Hallab 1881.  This was the most disappointing thing in Tripoli.   The desserts were good, but nothing to seek out.   We had mafroukeh and kanefeh. The owners tried to give us a tour of the back and all we saw was a used deep fryer. My suggestion is to spend your calories exploring the stalls and street food in the souk, rather than at Hallab 1881.

On our way home we stopped to swim in the sea.  We were told about a swimming spot at a brewery in the town of Batroun. Behind the Colonel Beer Microbrewery was a beach bar called Colonel Reef.  It was a very different than the beach in Tyre.  It was a rocky mess of a beach with a long dock, but it was a lot of fun.    One minute the water would be over your head and the next minute you’d be standing on a rock that had you completely out of the water.  I scraped my knees a few times. The beer was good. I enjoyed the lager more than the passion fruit beer. 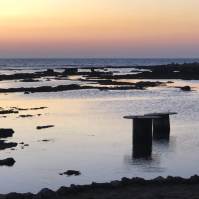 On our way home, we decided to stop at Diwan Al Hashem in Zalka for shawarma.  It is considered some of the best shawarma in Lebanon.   They make many different types of meat, including testicles!   We went for a simpler order of one beef and one chicken shawarma.   I did not enjoy the beef shawarma.  Their recipe includes putting lamb fat in between the meat on the spit to give it extra flavor.   I’ve never loved lamb and the gamey smell that it produces is a real turn off for me.    The chicken was excellent, but I could have done with a less sophisticated beef version.