I am home for the night and I thought I’d make a few notes about the last two days. Yesterday, we went on a tour with a local named Yves. (It’s pronounced Eves, you silly Philistine.) Yves is a semi-retired economist who now runs a community organization called Bien Vivre à Saint-Roch.  He was a great guide who taught us a lot about Quebec history and he ended the tour at the farmers’ market I wanted to visit the day before. He served us a nice lunch of local cheeses, bread, salad, cider, and Christmas cake.   It was really nice.

The market is called Grand Marché de Québec and it is nowhere near the place we walked to yesterday.  While we were there we tasted a lot of ciders, ice ciders, locals wines, and even a whiskey.  This left us a little tipsy and we ended up buying 7 or 8 bottles of local alcohol. Buying while drinking is never a good idea, but the liquor shelf back in Philadelphia will appreciate it. 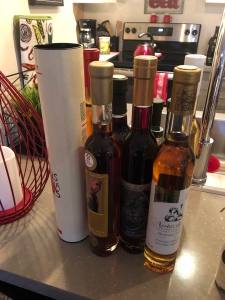 We ended Sunday with a very nice dinner at a place called Chez Rioux & Pettigrew. It was really good. I had a perfect piece of salmon, and Samer had a halibut appetizer that was delightful. I thought my fried bread pudding dessert was amazing and I want more of it while I am typing out the memory. So good.

Today, we went dog sledding at Mont Saint-Anne. We went with a company called Les Secrets Nordiques.  It’s a 2-hour excursion and it is really fun, though you are probably on the sleds for an hour.   We started out with me riding and Samer driving, and then we switched.   The guides didn’t tell us when we hit the halfway point, so I rode for about 2/3 of the trip and drove for about 1/3.  Our start was a little shaky.   Our dogs surged forward and then started fighting with another team of dogs.  One of our dogs broke free and started to run away!   It was kind of intense, but we pulled it together and hit the trails.

After the dog sledding, we went to a spa for lunch and relaxation. It was called Le Nordique spa Mont Ste-Anne and it was lovely. There are outdoor hot baths and saunas.   You do something hot (a bath, a sauna, or something) and then you are supposed to do something cold.   There is a freezing cold waterfall, a cold rain shower, and you can even jump in the frozen lake!  I barely touched the cold water stuff.  The air was freezing when I would leave the pool and that seemed sufficient to complete the hot and cold cycle. There was one old québécois lady who did jump in the frozen lake. I was impressed, but deep down I judged her for being insane. We went to relax in a yurt with a fireplace after a bit.

For dinner, we split a great charcuterie platter at a local brewery in Quebec called Noctem Artisans Brasseurs. The québécois know meats and cheeses and I love them for it.